Knoxville is a city located in eastern Tennessee along the Tennessee River. It is the principal city within the Knoxville Metropolitan Statistical Area with an estimated population of over 869,000 as of 2019. Use this guide to learn the pros and cons of living in Knoxville TN to help you decide if this should be your next home.

Knoxville is one of the great American cities and considered one of the best places to live in Tennessee because of its Southern charm, warm hospitality, beautiful scenery, and vibrant nightlife. It is also cheaper than other major cities in TN such as Nashville or Memphis.

Pros of Living in Knoxville

First, you will discover the positive aspects of living in Knoxville TN. 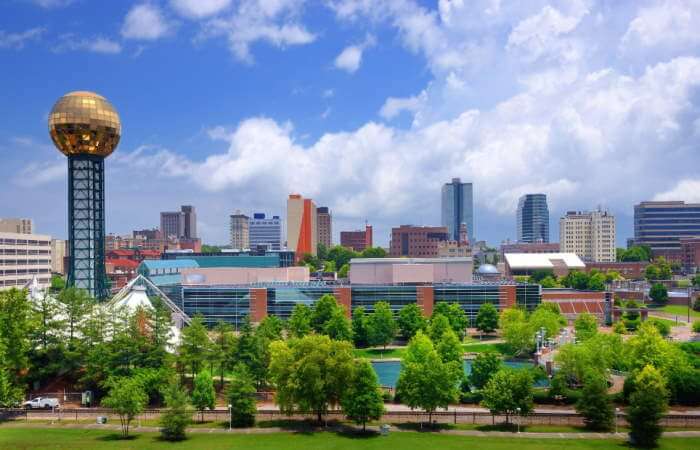 The biggest savings will come from the housing market. The home prices in Knoxville are exceptionally low, which means that you can own a property in this city for less than in other major cities in TN or the US. The median home price in Knoxville is $400,000 (the national average is $425,700).

In addition to a fantastic educational system, the athletic programs in Knoxville are also among the top 5% in the US.

Another reason to live in Knoxville TN is that it enjoys mild weather for most of the year. There are occasional snowfalls in the city, but they are mostly light. Frequent rainfalls also help to keep the city clean and green. There is an average of ten rainfall days per month in Knoxville TN.

The city is known as the gateway to the most visited national park in the US – the Smoky Mountains National Park. It is approximately 34 miles from the national park, which makes it easily accessible for residents.

Living in Knoxville TN allows you to make the most of the natural scenery and partake in various outdoor activities such as hiking, camping, and fishing. Aside from the national park, there are plenty of other parks to explore within the city limits.

Knoxville has consistently ranked in the list of Best Cities for Jobs. The robust job opportunities make it a suitable place to live and there is continuous employment growth in the city.

There are various employment prospects in Knoxville in the following industries: tourism, healthcare, tech, finance, retail, manufacturing, defense, and state and federal agencies.

There is no shortage of entertainment and recreational opportunities that residents can enjoy while living in Knoxville TN. This is a sports-crazy city; in fact, it is ranked number two on the list of the Best College Sports town.

Aside from the residents’ love of sports, there is also a thriving arts and culture scene in Knoxville. There are several cultural institutions such as museums, old historic houses, and theaters. The city also plays host to many annual festivals such as those that focus on Hispanic culture, Asian culture, beer, live music, and Dragon Boat racing.

Knoxville is a college town, so it isn’t surprising its nightlife scene is exciting. There are numerous bars, dance clubs, breweries, and live music venues that are scattered across different neighborhoods in the Downtown and West area of the city.

Cons of Living in Knoxville

It’s time to look at the potential drawbacks of living in Knoxville TN.

If you are moving to Knoxville as a family, you might want to think twice because of the high crime rate in the city. While the data are far from alarming, property theft has been a pressing problem in the city for years now.

According to City-Data, the Knoxville crime rate is 1.6 times higher than the national average (as of 2019). The good news is that the crime rate has been steadily decreasing over the past five years, especially with violent crimes.

The public transport system in Knoxville needs significant improvement. It is not as walkable as other cities in the US, especially the ones of a comparative size. If you are planning to move to Knoxville, you need a car to get around.

The heat and humidity during the summer months can be quite punishing, which is a major drawback to living in Knoxville. Make sure to prepare for the summers before you move or you will be in for a shock.

Since this is a college town, game days can be especially rowdy. You might want to stay indoors during these days as the fans can instigate all kinds of craziness.

Is Knoxville TN A Good Place to Live?

Putting aside the cons of living in Knoxville TN, it is a good place to live, especially if you enjoy natural scenery and you are looking for the best schools. The low-cost housing and the affordability of the city should easily outweigh the cons of living in Knoxville TN. However, you should decide to move to the city based on your needs and preferences, so be sure to do more research if needed.